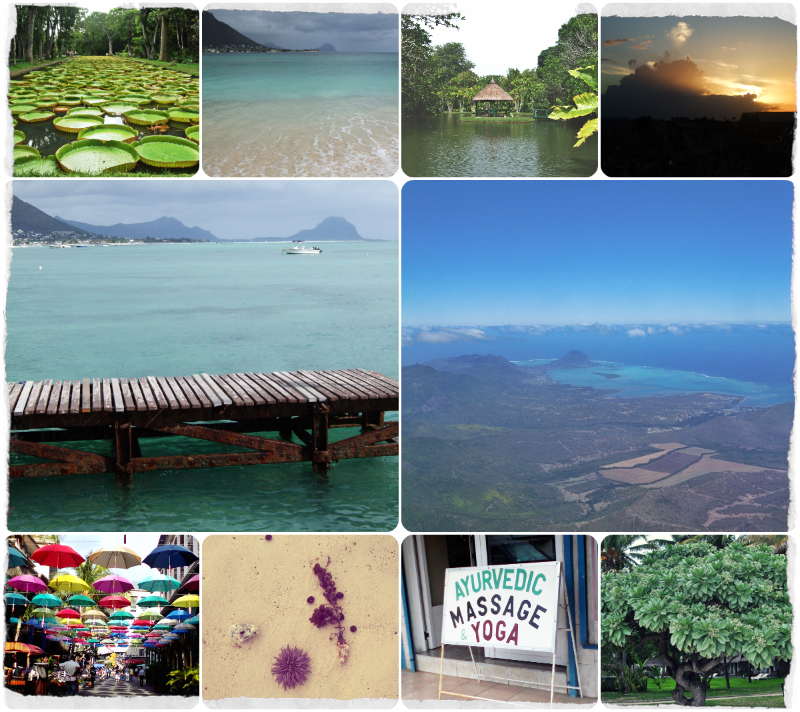 Ahhh the turquoise seas of the Indian Ocean… straight out of your dreams… Author Mark Twain wrote that ‘Heaven was copied after Mauritius’. I agree, he is not far wrong but it is also so much more than exclusive resorts and beautiful beaches. At the time, Mr Twain recalled it as being lively and culturally rich with “French, English, Chinese, Arabs, Africans …’’ and today this legacy lives on. Naturally this makes for a diverse and fascinating cultural heritage, as the immigrants brought along with them vast oceans of knowledge and traditions from their respective countries. Demographics are mainly African, Creol Mauritian (African-French colonial descent), Indo-Mauritian (Indian/Sri-Lankan descent) or Sino-Mauritian (Chinese descent). There is no official religion – Muslims, Hindus, Tamils, Christians, Buddhists and many other religions thrive here. Diverse but harmonious.

Now when it comes to Traditional Medicine, this cultural richness can only be a good thing, drawing upon wisdom from many countries/continents. Western Herbal Medicine, TCM (Traditional Chinese Medicine) and Ayurvedic medicine are some of the oldest systems of traditional medicine in the world. Here, it seems that all this knowledge has been interwoven into it’s own unique system. Market stalls are full of vibrant fresh produce and…. medicinal herbs aplenty! 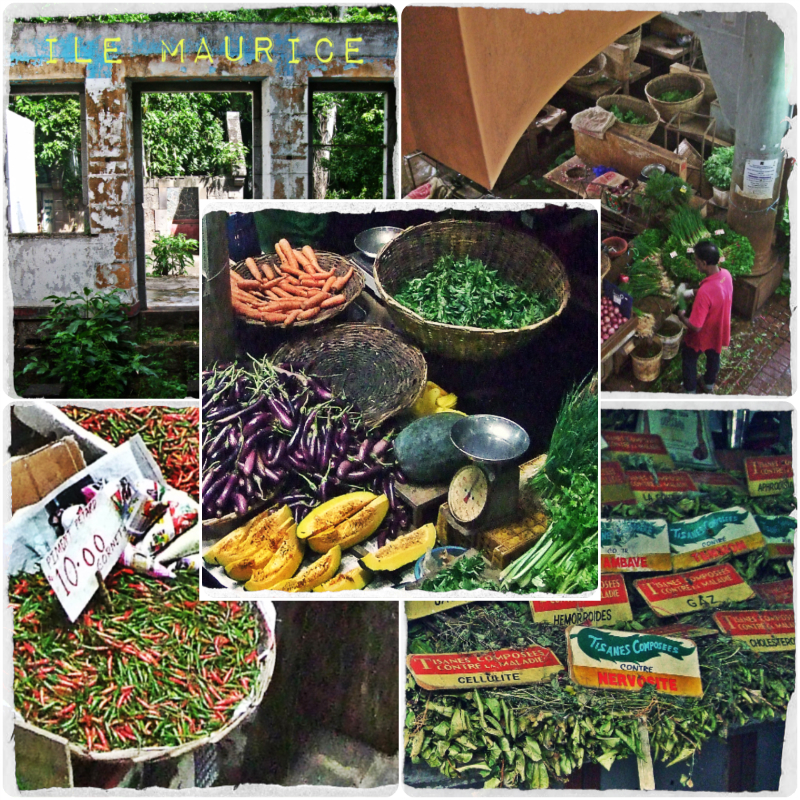 Venture into the markets of Port Louis (the urban hub & capital of Mauritus) and you’ll probably run into the local herbalist Jay Mootoosamy, who has a stall selling all manner of herbal preparations. The shelves are stocked with dried herbs and sign boards of ailments and remedies –  all in French of course! A good humoured chap he is, despite being very busy, he gave me 5 minutes of his time to tell me a little about his journey as a herbalist. I listen, totally fascinated. He finds it baffling that people want to take photos of his stall, but is happy to accommodate me. Perhaps he doesn’t realise is that what is normality here (people visiting a market herbalist and buying healing plants) is not so ‘normal’ in the western world. Sadly so…. oh how much I wish all British markets had a resident herbalist! 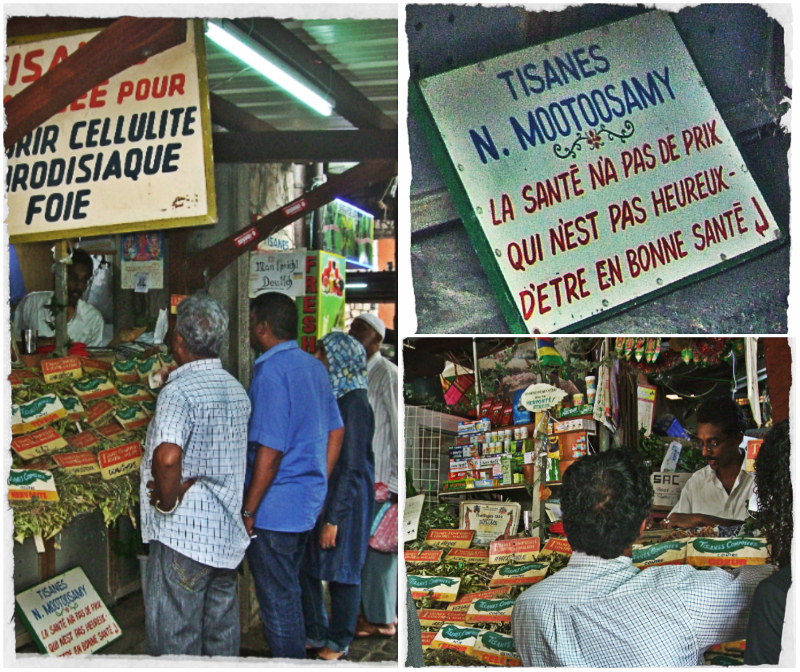 Herbal wisdom is often passed down through the generations. In the Mootoosamy family, it spans no less than 4 generations: his father, grandfather and great grandfather dabbled in Herbal Medicine, so this is where Jay learnt many of his skills. His family came to Mauritius from Tamil Nadu in Sri Lanka, where herbal medicine is ingrained in the local culture. But make no mistake, Jay Mootoosamy is more than a home herbalist and is in fact highly educated in herbalism, with several formal qualifications under his belt. Ironically, he started studying Pharmacy when he was younger but as fate decided (and luckily for the Island of Mauritius) he went on to continue the art of his ancestors: Plant Medicine. He has also done several high profile talks on herbal medicine, including an international conference organized by the United Nations in the Seyshelles (focused on the collation and preservation of traditional herbal medicine knowledge throughout the Indian Ocean islands).

His clientèle varies from locals to tourists to businessmen on work trips – all ages and nationalities. Every time I passed there was a queue so I had to bide my time to ask some Qs! Here in Mauritius, as with many other of the Indian Ocean islands, traditional medicine has been the primary form of healthcare for centuries and it is still going strong. As a herbalist, it was reassuring to see that traditional herbal knowledge is being used and preserved for further generations. In fact, for many Mauritians, visiting a herbalist is as routine as the weekly food shop.

According to Jay, many chronic diseases can absolutely be treated with herbal medicine over the long term (there is no magic pill but it is a process of gradual healing).

I’m referring to the moon not insanity 😉 I’ll explain more in a minute… The teas on sale in his little stall are mostly wildcrafted from forests in the mountains of Mauritius, away from urban and agricultural pollution. He does also import a handful of Ayurvedic herbs from India. Interestingly, the herbs are harvested according to the lunar calendar (a principle of Ayurvedic Medicine from India). His treatments btw also follow the lunar calendar: 28 days in length. This is the same method used by his ancestors in Sri Lanka. Sounds far-fetched at first, but actually this isn’t just hocus pocus, studies have in fact proven that the chemicals in plants change according to the lunar cycle. At certain times of the month, the levels of plant chemicals will be more concentrated – amazing stuff! The lunar cycle also underpins ‘Biodynamic Farming’ which grows/harvests crops in accordance with the lunar calendar, so that their nutritional value is maximised.

Conservation of our Medicinal Plants

He does worry about the decline in natural ecosystems/habitats where he collects his medicinal plants from. The Indian Ocean Islands are naturally biologically diverse areas, however urbanisation and deforestation are a constant worry. I guess these are problems the world over. You cannot recreate a biological diversity in an area containing hundreds of different species of plants. Once it has been destroyed it is hard to recreate and this is why protection of our natural resources is such a priority. UNESCO are now directly involved in tackling the problems of over-exploitation, bio-piracy, habitat damage and cliamate change – all of which threaten the future of herbal medicine. I just hope enough can be done before it is too late…

Naturally, I could have stayed there all day chatting, but understandably Jay is a man in demand on the island and his reputation follows him! Yet another queue of people was forming, each waiting for a piece of his expertise. So, I left the man to his work. At the end of the day, it was just really lovely to see a thriving herbal stall & I look forward to my next visit (well hopefully the queue will be a little shorter next time!)

Mauritius I’ll be back to discover more…